The cover this week, the original of which comes from Flight, shows a production Fairey Battle during its acceptance tests.

An article on The Work of the Test Pilot appears in Part 4, with a similar photograph in black and white. 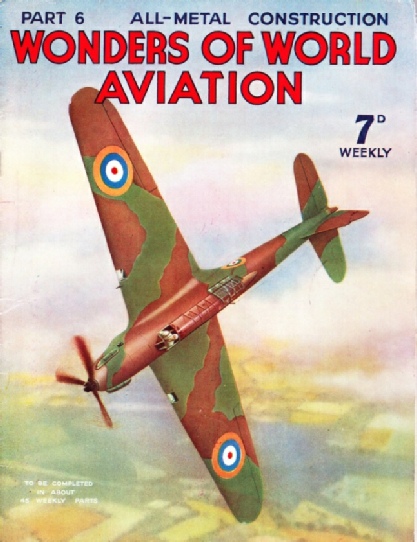 The First to Australia (Part 2)

The development of rapid coast-to-coast flying in luxurious air lines. One of the major triumphs of civil aviation is the spanning of the United States by air from Atlantic to Pacific. The United States of America, vast as they are, offer a fascinating panorama of air transport work. Only recently one commercial line offered “two tickets for the price of one” provided the spare tickets was used by the traveller’s wife. This chapter is contributed by Sidney Howard.

A TAKE-OFF FROM THE DECK OF HMS COURAGEOUS, which was converted to an aircraft carrier in 1928. The machine is a Blackburn Shark torpedo-bomber-reconnaissance biplane. During take-offs and landings, an aircraft carrier steers directly into wind to keep as low as possible the speed of the aircraft in relation to the deck. The jet of steam, by which the ship’s navigator keeps a check on the wind direction, is visible below the machine in the picture.

Flying Above the Boulder Dam

FLYING ABOVE THE BOULDER DAM, on the Colorado River, this air liner is following the New York-San Francisco route of Transcontinental and Western Air, Incorporated. This route passes over some fine country, including the scenic Grand Canyon. The aeroplane is of the “skysleeper” type, which carries seventeen passengers and has eight sleeping compartments. The cabins are steam-heated and air-conditioned. Captain, first officer and stewardess make up the crew of three.

The Route Followed in the First England-Australia Flight

THE ROUTE FOLLOWED in the first England-Australia flight. The fliers covered 11,130 miles during the journey, which took them twenty-seven days twenty hours. The total time spent in the air was 124 hours. Trying weather was experienced on the first section of the route from London to Cairo, but the worst storm occurred between Bangkok and Singora, Siam.

The First to Australia (Part 2)

The story of the first flight to Australia. Among the aviators who were attracted by the flight of over 11,000 miles and by the £10,000 prize offered by the Australian Government for the first Australians to fly from England to the Commonwealth in under thirty days were two brothers, Ross Smith and Keith Smith. The chapter is written by H G Castle, and is concluded

This is the fourth article in the series Great Flights. 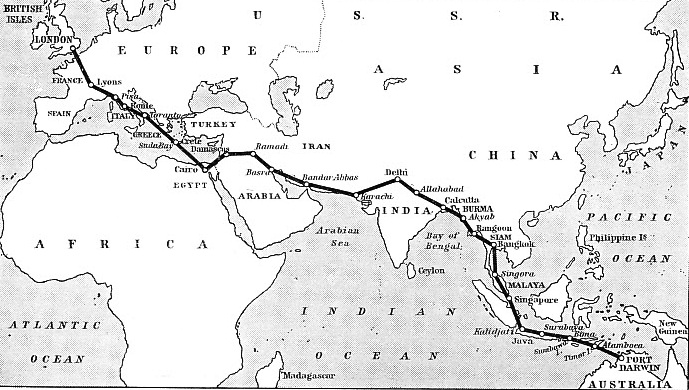 The Aircraft and Crew on the First England-Australia Flight

AIRCRAFT AND CREW. The engines were Rolls-Royce Eagle VIIIs, each giving 360 horse-power. Spare parts for engines and airframe were carried in the machine because limited time had prevented their being sent in advance. Little mechanical trouble, however, was experienced. The aeroplane was 42 ft 8 in long and stood 15 feet high. The span of its main planes was about 68 feet. 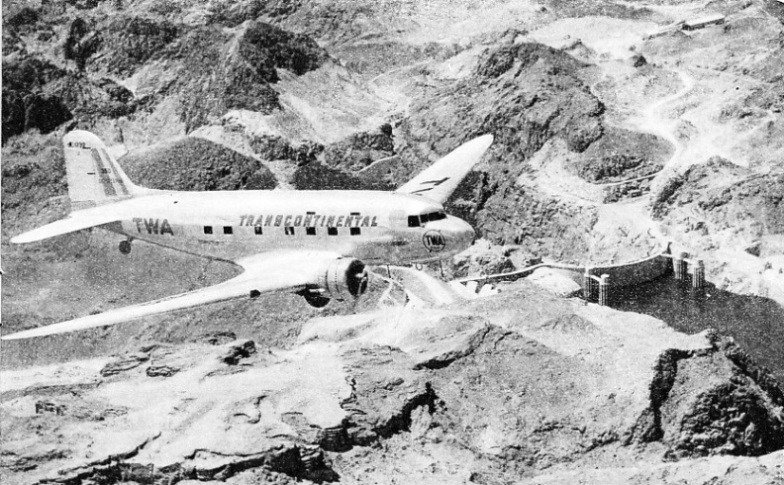 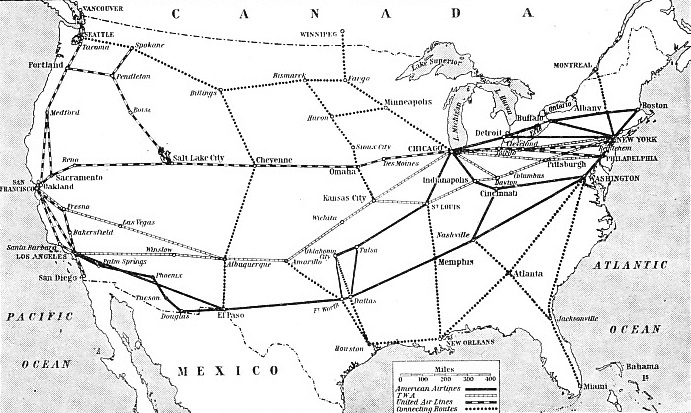 THE PRINCIPAL AIR ROUTES OF THE UNITED STATES, and their connecting services. There are three trunk routes from the Atlantic coast to the Pacific coast, and each is operated by a different company. The TWA route between New York and Los Angeles via Pittsburgh and St Louis is claimed to be the shortest. It covers 2,557 miles. 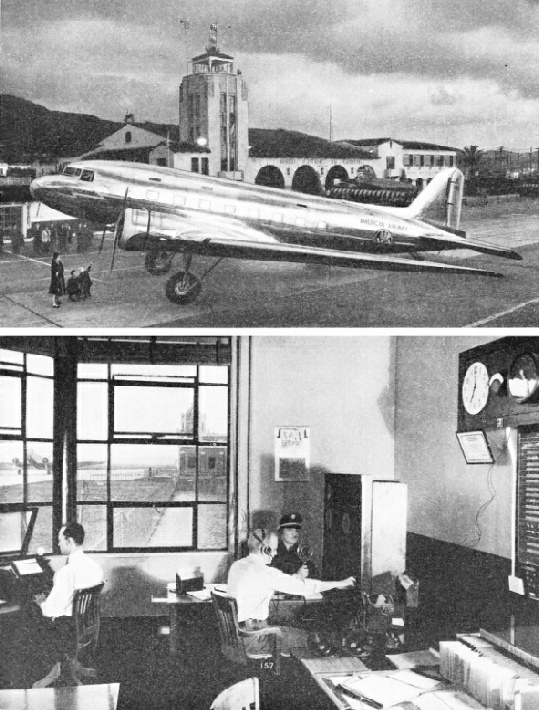 AN AMERICAN AIRLINES “FLAGSHIP”. The top picture shows one of the Douglas aeroplanes used by American Airlines Incorporated. It has two Wright Cyclone engines which drive controllable-pitch propellers. The propeller hubs and the wings are provided with devices for dealing with the possibility of ice formation in cold weather.

IN THE CONTROL OFFICE. The lower picture shows the TWA “dispatcher” at Kansas City, Missouri, speaking into the microphone. Flight dispatchers are Government-licensed men and are experienced pilots; they maintain day and night supervision over the movements of aircraft. These men frequently make trips over the routes to keep in touch with the prevailing conditions.

Deck landings and catapulted machines enable aircraft to act as the eyes of the Navy. The interest in naval flying is very great, an interest that began so many years ago when what was then known as the Royal Naval Air Service was established. The RNAS was incorporated with the Royal Flying Corps on April 1, 1918, the two branches thereafter being known as the Royal Air Force. Several readers who can look back to service in the RNAS are among the correspondents who have expressed their enthusiasm for Wonders of World Aviation.

Capt. Norman Macmillan, who has contributed this chapter, has just published another book, The Chosen Instrument, and in it sets out to prove that the bombing aeroplane can become the instrument of world peace. The Editor comments, “Although I do not agree with him, I read his forceful arguments with more than ordinary interest. My own view is that no invention will create a state of world peace - the instrument must be man himself. But a debate on that would merely raise the often-repeated question - “Will the Machine finally control Man, or Man the Machine?”

You can read more on aircraft carriers in Shipping Wonders of the World. 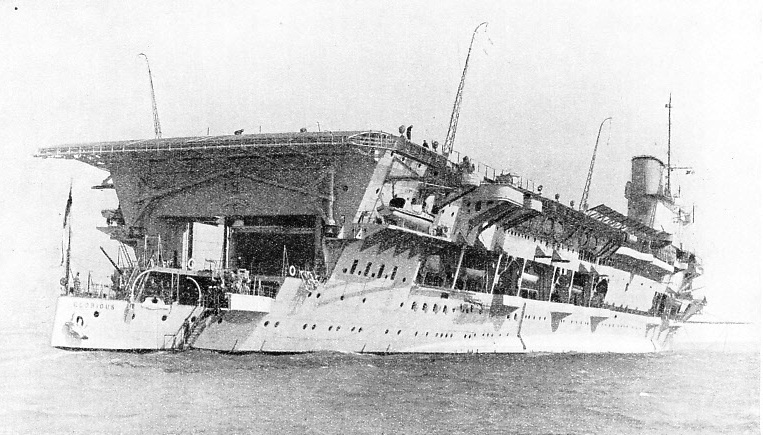 AIRCRAFT CARRIER HMS GLORIOUS, converted from a cruiser in 1930. An aircraft carrier is more than a floating aerodrome. She is a naval unit, complete with crew for handling the ship and manning her guns. The superstructure, including funnel and bridge, is arranged at one side of the vessel to give as much clear space as possible for the flying deck. 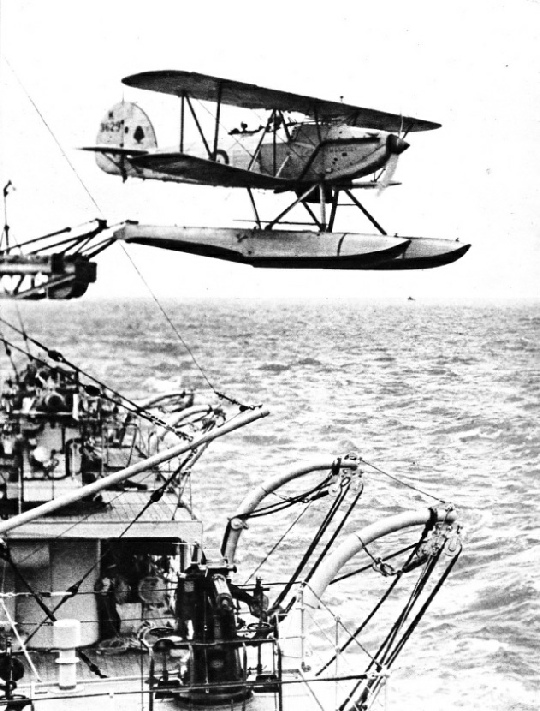 A HAWKER SEAPLANE LEAVING THE CATAPULT of HMS Sussex. The aircraft is attached to a carriage on the catapult, and the engine is run up to full speed. At a signal from the pilot the carriage is shot along its runway of seventy to ninety feet by a charge of cordite. When the carriage reaches the end of the runway, it releases the aircraft, which shoots off into the air at flying speed.

You can read more about seaplanes in Part 2. 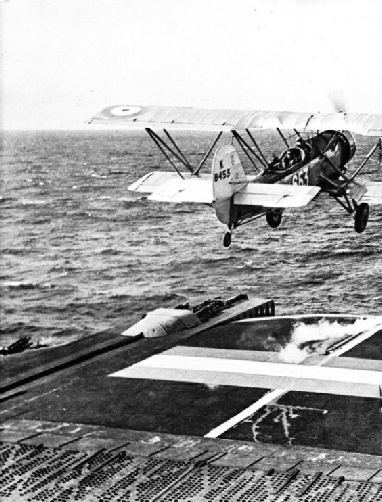 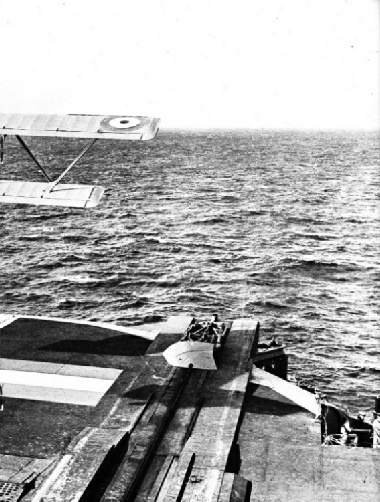 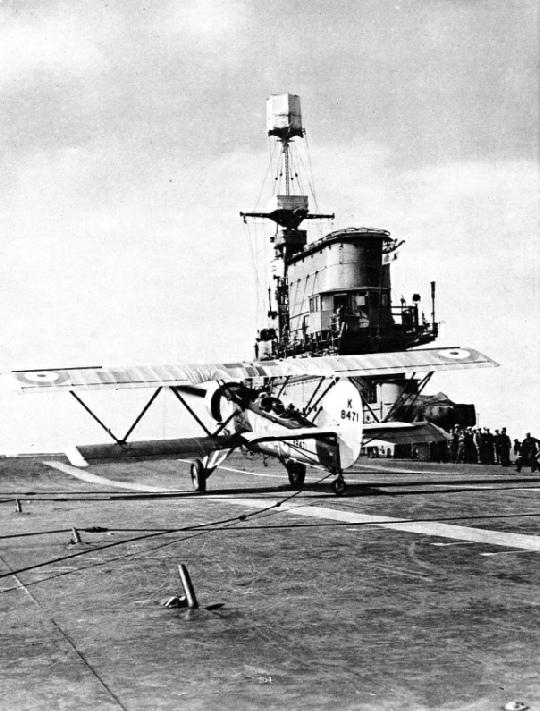 CABLES PULL UP THE AIRCRAFT after it has landed on the deck of an aircraft carrier. A steel pick-up hook, underneath the fuselage of the aircraft, picks up one of the transverse cables as the machine comes in to land. The cables are attached to hydraulic control mechanisms below the deck. The height of the cables, when set for landing purposes, is fifteen inches; by means of the hinged posts carrying the cables, they are laid flat on the deck for take off.

How light members are assembled to produce strong airframes. There has been a good deal of controversy from time to time over the question of the use of wood or metal in aircraft construction, mainly because of enthusiasts in either camp, but it is our business in this work to review any controversial topic impartially and to bring together the results of all experience. Marcus Langley, who was trained in metallurgy and naval architecture, and is the author of Metal Aircraft Construction and Seaplane Float and Hull Design (Pitman), contributes to this part a chapter on metal construction which introduces the subject very ably. The advantages of metal are presented lucidly by this author without prejudice or bias, for he is well aware that wood has its place and, in certain circumstances, may be more desirable than metal. It was natural that wood should be chosen in the early days of experiment, for it was more easily handled and appeared to be the lightest material available for its strength; there was then no question of mass production at speed. 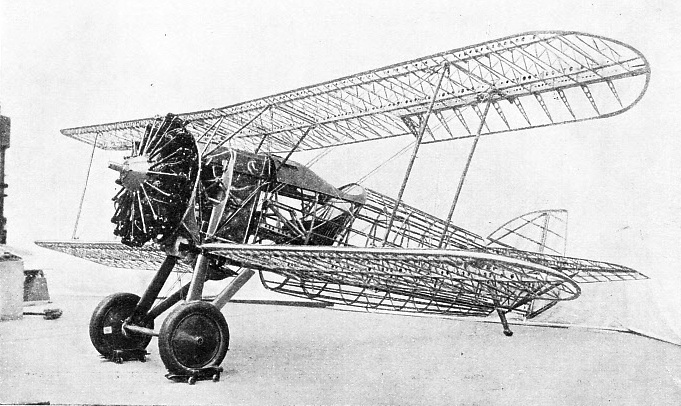 Framework of a Single-Seater Fighter

FRAMEWORK OF A SINGLE-SEATER FIGHTER with the fabric removed. It is a Czechoslovak all-metal machine, and is a typical example of the older type of biplane construction now largely superseded by the method by which wings and fuselage are metal-covered. This metal covering takes much of the load from the framework.

EXAMPLES OF MODERN CONSTRUCTION METHODS. On the left is a representative type of fuselage joint, part of a Czechoslovak military biplane. The joint is made up of plates and machined fittings connected together with pins, bolts and tubular rivets. On the right is a section of an Armstrong Whitworth high-tensile steel spar. The corrugations stiffen the thin metal and prevent buckling. The spar is about eight inches across and the metal is approximately one-hundredth of an inch thick. These spars are always built into the wing upright.

Man’s original ascents into the air were made possible by the hot-air and hydrogen balloons. It was probably the fact of having been born into a paper-making family that enabled two young Frenchmen - the brothers Montgolfier - to translate into reality the centuries old dream of flight. They progressed until they saw their balloon ascend with the world’s first aeronauts to make the pioneer voyage into the air. This chapter is written by P R Bird, and is concluded in part 7. 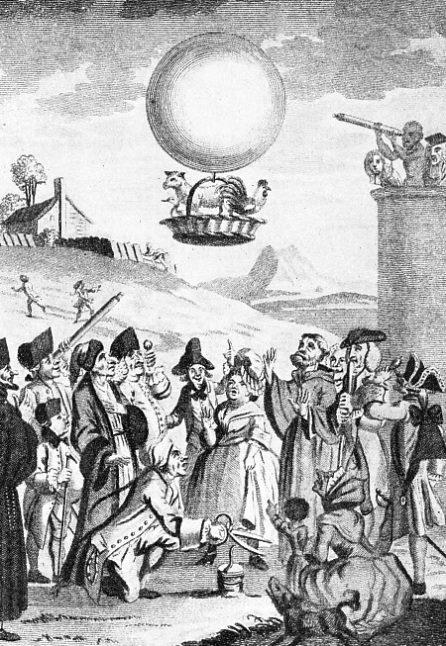 A PRELUDE TO HUMAN FLIGHT was provided by a sheep, a duck and a cock being sent up in a basket. The object was to test whether the animals, unaccustomed to the rarefied atmosphere existing at a height would suffer any ill effects. In the old picture reproduced here the balloon appears to have been drawn as a hydrogen balloon, although it was a Montgolfier hot-air balloon.