This week’s cover, based on a photograph supplied by Flight, shows a Hawker Hind diving. The Hawker Hind is a single-engined day bomber used by the Royal Air Force. This biplane has a Roll-Royce Kestrel V engine rated at 600 horse-power at 11,000 feet. The speed at sea level is 154 miles an hour, rising to 118 miles an hour at 19,680 feet.

This cover was reproduced as the colour plate in part 21. 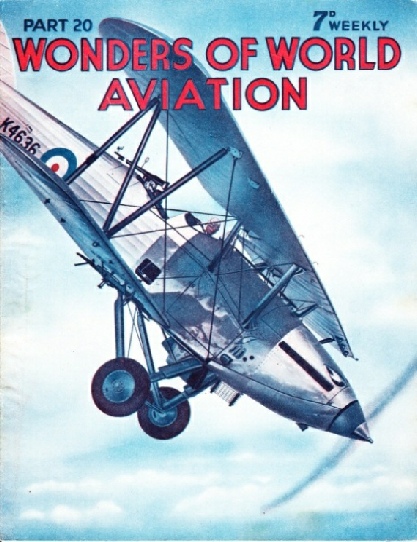 Novel Uses of the Aeroplane (Part 2)

At one time the railways in Great Britain held a virtual monopoly of all landborne traffic, but that monopoly has to some extent been shared by road transport, and now the aeroplane claims a share, too. It was soon realized by the railway companies of Great Britain that the aeroplane had one outstanding and invaluable advantage over the train - it could save time where there was mountainous or hilly country and where connexions had to be made either before or after a sea crossing. The main-line railway companies in Great Britain were quick to appreciate the possibilities of the future of civil aircraft. Although it was extremely unlikely that the aeroplane would outrival the train, it was nevertheless a force to be considered.

In 1929 the four main-line companies, the Great Western, the London, Midland and Scottish, the Southern and the London and North Eastern obtained powers to operate air services in Great Britain. The first of these services was operated on a charter basis for the Great Western Railway by Imperial Airways between Birmingham, Bristol, Cardiff, Exeter and Plymouth. This service began in 1933. In the following year Railway Air Services was formed by the mainline companies and by Imperial Airways; of the four companies the London and North Eastern Railway is not yet an active participant.

In this chapter Major A. P. Le M. Sinkinson shows that Great Britain owes some of its most progressive air schedules to Railway Air Services.

CATAPULTED AIRCRAFT have played an important part in the development of German mail and freight services. Catapults are used for the aircraft that operate the mail service between Germany and South America. Until the end of 1935 aeroplanes were catapulted from the Europa and the Bremen to expedite the delivery of mails carried by these ships. The illustration shows the seaplane mounted on the catapult of the Europa.

Novel Uses of the Aeroplane (Part 2)

All over the world aircraft have been used for purposes scarcely contemplated by the pioneers of flight. In this chapter, T. Stanhope Sprigg describes how governments and private enterprises cooperate with aircraft. The article is concluded from part 19.

German civil aviation today holds a leading position in the world, and the story of its rise to that position is one of the most interesting in our series on civil aircraft of the world.

German airways are controlled by a corporation, Deutsche Lufthansa, or, as it is popularly known, DLH. The network of routes is the closest in Europe, and these routes have been developed in the face of great difficulties, especially as German aviation was affected by the aftermath of the war of 1914-18 to a much greater degree than that of any other country.

For some years after the Armistice the Germans produced no Service aircraft, and the prestige that German aviation has today is due to the pioneer work carried out in the early years of civil aviation development. This chapter is by Sidney Howard.

One of the most popular of the light aeroplanes is the Cub, known until recently as the Taylor Cub. It is now manufactured by the Piper Aircraft Corporation of Pennsylvania, USA. These aircraft are built in large numbers and which may be used from land, water or ice. This chapter, by Arthur Clark, provides a full description of these popular aircraft. The article is the first in a new series on Light Aeroplanes.

The Schneider Trophy races were of a more serious nature than the Hendon Pageant, but Portsmouth and Southsea and the Isle of Wight were also great meeting places for flying men, who watched their colleagues or successors attain incredible speeds over the Solent. The memory of those gatherings is also now only a sentimental one, but again I am reminded of the enormous crowds, tremendously thrilled, tremendously impressed by what they saw. I am reminded particularly of that day in September 1931 when Great Britain won the trophy for the third successive time, and when it thus became the property of the nation. It was an enormous advertisement for British aviation. It was a triumph that echoed round the world. British flying prestige has never stood so high as it did then; and today, when we hear of the criticisms levelled against British aviation, we may wish we had another Schneider Trophy contest to show that so many of the critics are ill-informed and that, whatever faults there may or may not be on the administration side, the pilots are no less efficient than the men who won the Schneider Trophy for Great Britain in 1931. The speeds attained by the modern fighter are comparable with and a direct evolution of the speeds put up by the specially designed and specially built Schneider seaplanes. The Schneider Trophy races have provided aviation with an imperishable story of skill and courage. In this chapter, Miles Henslow describes this series of races, which was inaugurated in 1913.

The Winner of the Schneider Trophy in 1923

THE AMERICAN SEAPLANE which won the Schneider Trophy race in 1923. Lieutenant D. Rittenhouse gained first place in this Curtiss aircraft at a speed of 177.38 miles an hour. The American entries were backed in 1923 by the United States Government, which paid the expenses and supplied specially trained pilots to fly the seaplanes. In Great Britain private enterprise supplied entries.

ENGLAND, SOUTH WALES, NORTHERN IRELAND AND SCOTLAND are served by RAS aircraft. Associated companies run services to the Isle of Man, the Channel Islands, the Hebrides, and the Orkney and Shetland islands. Where the routes cross the sea, the saving of time, in comparison with surface transport facilities is remarkable. Thus London and Belfast are only four hours apart by air (including road connexions), but the train and boat journey requires 11½ hours.

A GERMAN JUNKERS AIR LINER arriving at Croydon Airport. This aircraft, of the G38 type, accommodates thirty-four passengers and a crew of seven. It is powered by four 750 horse-power Junkers Jumo 204 diesel engines. The maximum speed is 131 miles an hour. The liner’s length is 77 ft 2-in and the wing span is 146 feet.

FORMERLY A PARADE GROUND, Berlin’s aerodrome at Tempelhof is only two miles from the heart of the city. Tempelhof Airport is the centre of national and international aviation in Germany, but there are other aerodromes in Germany which are also of international importance.

AN AIR VIEW OF MUNICH AERODROME, which is a junction point for several German air routes. The main route from Berlin to Rome passes through Munich. From Munich there are air routes to Vienna, to Zurich and to Frankfurt; there is one direct route to Frankfurt and one via Nuremberg.

THE MAXIMUM SPEED of the Cub monoplane is 87 miles an hour; its landing speed is about 30 miles an hour. It is a high-wing braced monoplane with a forty horse-power four-cylinder engine of the horizontally opposed type. A split undercarriage is fitted and the machine is exceptionally easy to fly. Only a short take-off and landing run are required; thus the aeroplane is suitable for flying from small fields. 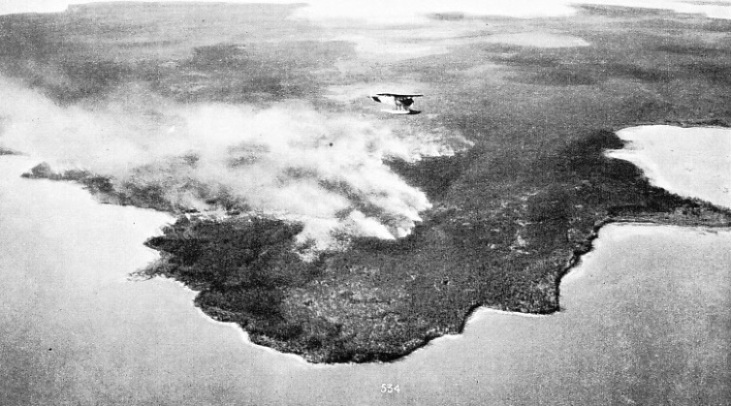 AIR PATROLS assist the forest authorities of Canada and the United States of America to deal with outbreaks of fire in dry weather. With the help of radio the pilots are able to direct ground operations. Explosive and chemical bombs may also be dropped from the air to assist in the fighting of the fire. This photograph shows a seaplane above a fire at Clearwater Portage, to the south of Cormorant Lake, Manitoba, Canada. 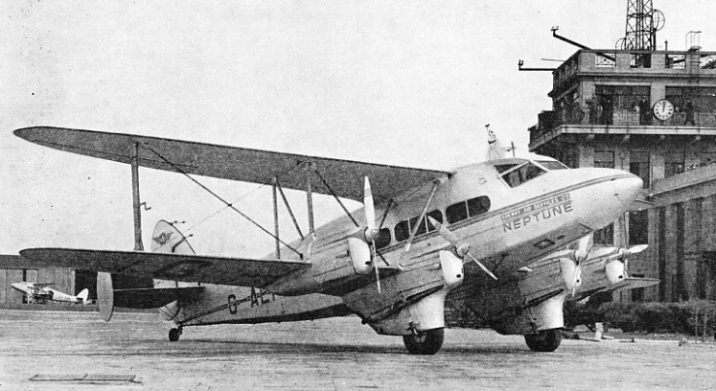 The “Neptune” at Croydon Airport

THE “NEPTUNE” AT CROYDON AIRPORT. The aircraft illustrated is one of the DH 86B four-engined biplanes used on the London-Belfast-Glasgow and other routes of the railway Air Services. Each of the four Gipsy Six (Series 1) engines is of 200 horse-power. The overall length is 46 ft 1¼-in, the span 64 ft 6-in, and the height, with tail down, over the fixed aerial, 13 feet. Cruising speed at 1,000 feet is 138-142 miles an hour. Maximum speed at sea level is 162-166 miles an hour. RAS machines are painted in silver picked out with green and red stripes. 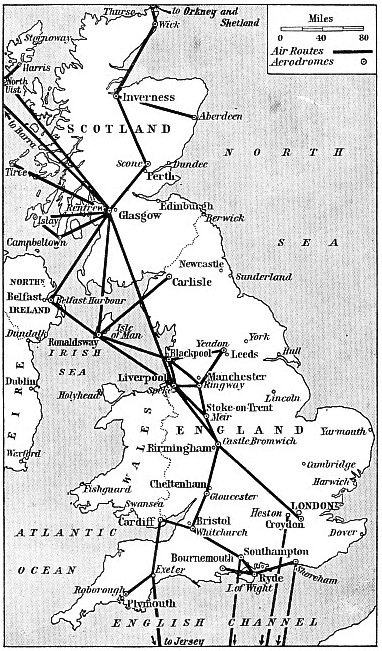 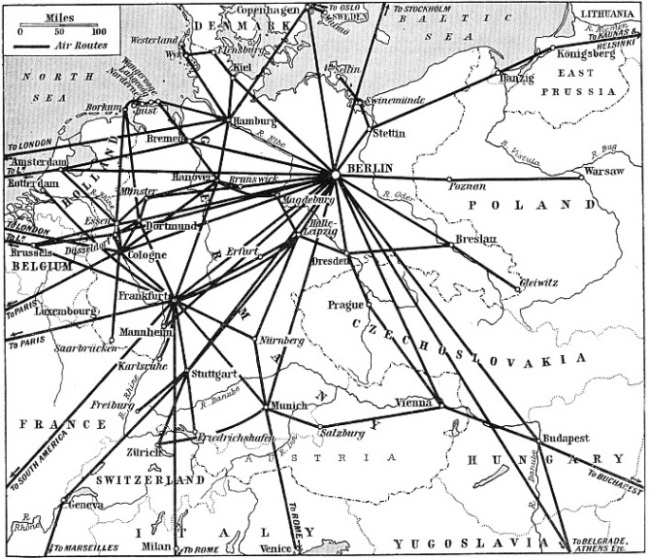 THE CLOSEST NETWORK OF ROUTES IN EUROPE is that of the German airways. Civil aviation in Germany is such that the multiplicity of the services gives the traveller facilities on a scale which is comparable with that provided by the railways. A reduction of twenty per cent in the fare is made for return journeys, and return tickets are normally valid for one month. 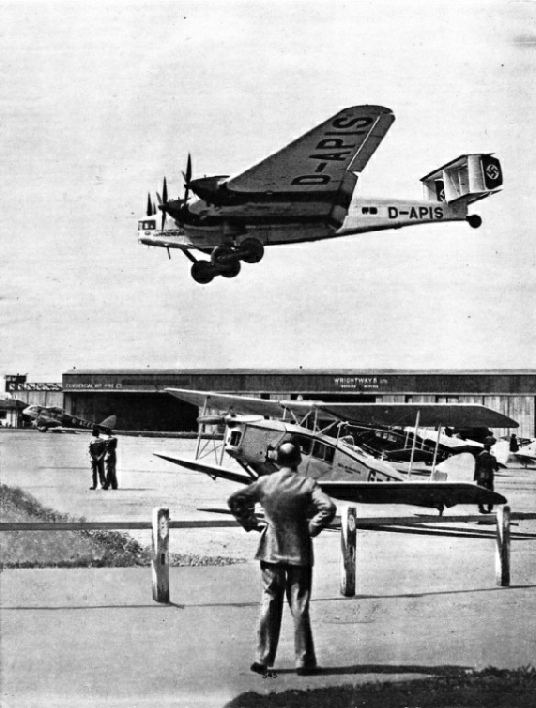 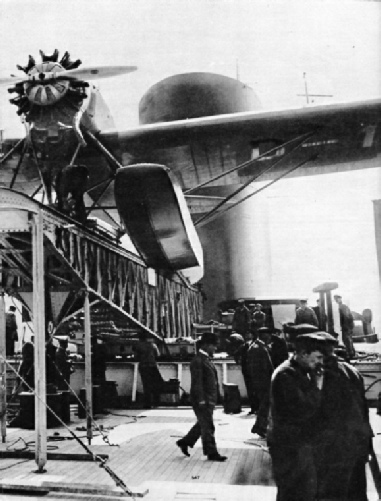 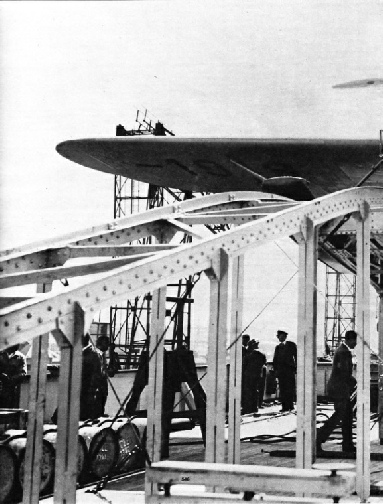 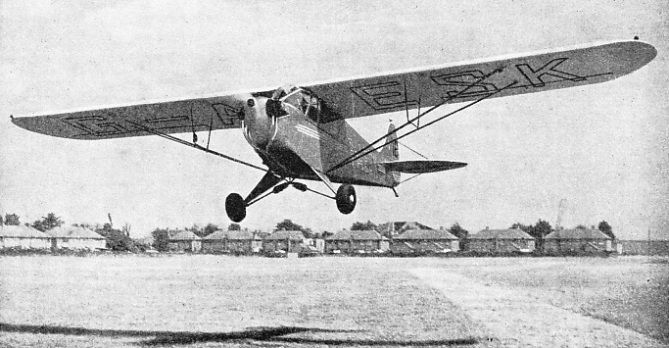 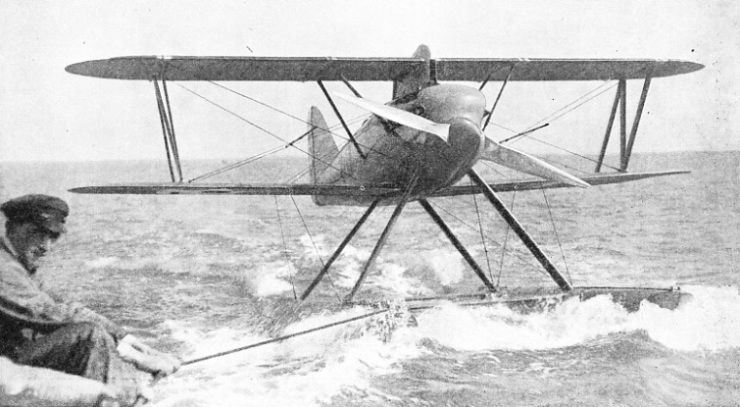 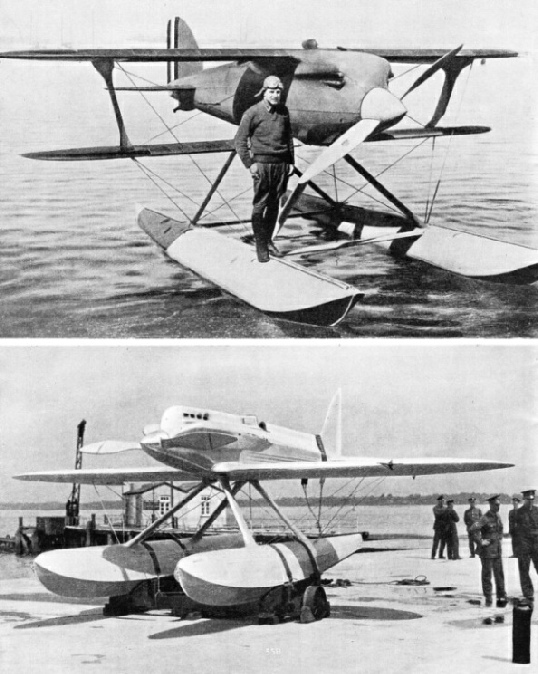 FOR THE SECOND TIME in succession the Schneider Trophy was won in 1925 by America. With this aircraft, Lieutenant J. Doolittle (standing on the float) achieved a winning speed of 232.57 miles an hour. The aircraft was a Curtiss seaplane with a 600 horse-power Curtiss engine. Great Britain was unfortunate in that her best machine, a Supermarine seaplane, crashed before the race.

THE WINNING AIRCRAFT in 1927, when the race was held in Italy. The British entries were under the charge of the British Government and were handled by RAF personnel. The winning machine was a Supermarine S5, piloted by Flight Lieutenant A. M. Webster, whose average speed for the race was 281.68 miles and hour.