This week’s cover shows a Focke-Wulf Fw.200 Condor passenger monoplane. Its four 720 horse-power BMW radial engines give it a cruising speed of 214 and a maximum speed of 261 miles an hour. 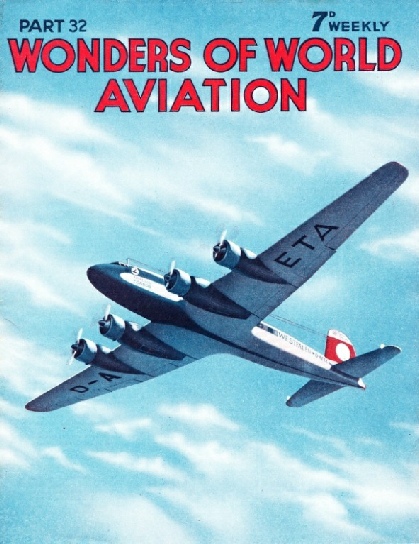 Aero Engines of the Great War

Aero Engines of the Great War

The Work of Airmen

Routes of the Empire

The conclusion of this chapter by Sidney Howard describing some of Norway’s aviators. The flight of the Norge will be described in a later chapter, which will deal also with the last voyage of the Italia, sister ship of the Norge. The article is concluded from part 31.

A VEDETTE FLYING BOAT, driven by a pusher airscrew, lying alongside a glacier on the east side of Great Bear Lake, North-West Territories. Considerable flying is carried out within the Arctic Circle, which cuts across the northern part of Great Bear Lake. The aircraft have to be suitable for use in extremely cold conditions and for this reason air-cooled engines are normally used.

CONVERTING THE CAMBRIA FOR PASSENGER CARRYING after its experimental North Atlantic flights in 1937. Among the modifications of design for the purpose of those flights was the inclusion of large-capacity petrol tanks. The flights, with those of the flying boat Caledonia, were part of the survey work for the projected regular service between Great Britain and the United States.

SEAPLANES OF THE RCAF being refuelled at St John, on the south coast of New Brunswick. The numerous lakes and waterways of Canada provide natural aerodromes which have caused seaplanes to be used considerably more than landplanes. Most of the lakes are frozen in winter, when they provide suitable landing places for aeroplanes fitted with skis.

The Work of Airmen

All men in the Royal Air Force other than those who hold commissions are called airmen, The description is applied to all those in the ranks irrespective of their trade or their rank. The work that airmen carry outs is widely varied and covers a large number of trades. In this chapter, Arthur Clark describes the variety of training all airmen receive that will be of value to them when they return to civilian life.

Routes of the Empire

The keystone of civil aviation in the British Commonwealth of Nations is Imperial Airways. The company was incorporated on April 1, 1924 as the “chosen instrument” of the British Government to develop British commercial air transport on an economic basis. In this chapter, by Sidney Howard, its two trunk routes - to South Africa and to India and Australia - are described.

Described by Anthony Fokker and by James Mollison as the world’s finest pilot, Sir Charles Kingsford-Smith experienced the extremes of triumph and disaster. He began as an unknown aviator equipped with nothing but a determination, which in itself amounted to courage, to become a famous long-distance flier. By taking amazing risks, by refusing to surrender his courage and by first-class flying, he rose from obscurity to be the world’s leading pilot. He was knighted by King George V; he was acclaimed as a national hero in Australia; and in that same country he was bitterly attacked by the same people who had made him a hero. But nothing could upset his courage nor impair his ability as a pilot, and he died in the knowledge that he was again rightly acknowledged as a hero.

Almost every aspect of his dramatic career would provide a writer with material. There is incomparable drama in the story of the Southern Cross’s crash in a remote swamp, when Kingsford-Smith and three companions were on the first stages of their flight from

Australia to Great Britain. They could hear of the rescue efforts being made on their behalf, but because their radio was damaged, they could not transmit and let their rescuers know their position. For eleven days these men endured starvation, thirst, weakness. They knew hope and despair. They saw aeroplanes fly close to them yet fail to see them. They grew so weak that it was only with difficulty that they could keep alight the beacon, which was essential if they were to attract attention. This chapter, by H. G. Castle, tells the story of this Australian hero. It is the thirteenth article in the series Makers of Air History. The article is concluded in part 33.

THE THREE-ENGINED FOKKER MONOPLANE flown by Kingsford-Smith nearing New York shortly after his North Atlantic flight from Ireland to Newfoundland in 1930. The aircraft was bought by Kingsford-Smith from the explorer Sir Hubert Wilkins in 1928, and fitted with three new Wright Whirlwind engines of 220 horse-power each. The wing span was 71 ft 8½-in.

EXTERNAL PIPES FED THE INLET VALVES on the cylinder heads of the 80 horse-power Le Rhone rotary engine. The mixture was taken by pipes from a collector box on the rear of the crankcase. The engine developed 85 horse-power at 1,300 revolutions a minute. Oil was consumed at the rate of one gallon an hour and petrol consumption was 6-7 gallons an hour.

A REMOTE BASE OF THE RCAF. The photograph was taken at Yellowknife, North-West Territories. Although the RCAF now works on similar lines to those of other air forces, in the past it gave considerable assistance to civil bodies. Much of this work ceased in 1936 when civil aviation was taken over by the Department of Transport.

JUNKERS THREE-ENGINED SEAPLANE of the type used by DNL in Norway. It is a Junkers Ju.52/3m. Along the whole of the trailing edge of the main plane is a flap mounted to give a double-wing effect and to enable the camber of the wings to be varied and thus alter their lift. The outer sections of the flap are operated differentially as ailerons.

Checking the Sights of a Gun

CHECKING THE SIGHTS OF A GUN in the observer’s cockpit of an aeroplane before a flight. The rank of the airman in this photograph is that of flight sergeant. Men are now recruited for training as observers. The work of this observer includes navigation, bombing and photography. On completion of a short period of service all observers who are suitable are to be trained as pilots.

BELLANCA SEAPLANES AND A VANCOUVER FLYING BOAT which were stationed on the St Lawrence River at St Pierre, Quebec. The Vancouver flying boats were made by Canadian Vickers and are still used for coastal reconnaissance  by the RCAF. Several versions of the Vancouver have been built and the Vancouver IIA was a special model for military purposes strengthened for an all-up weight of 10,000 lb. 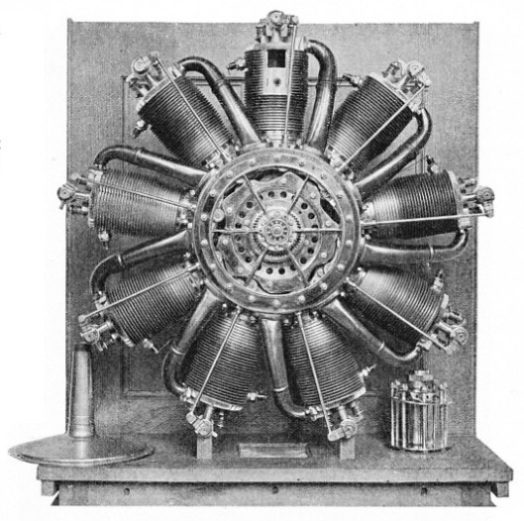 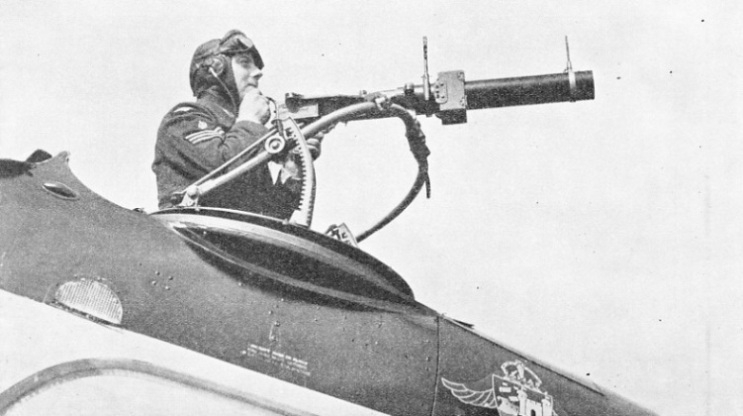 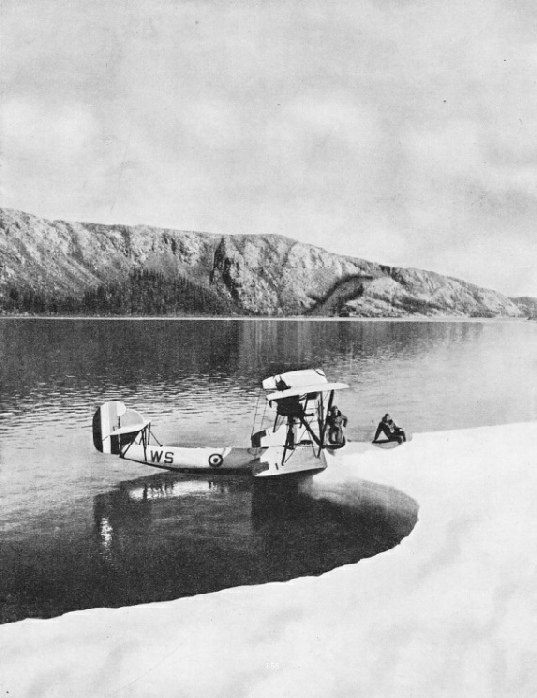 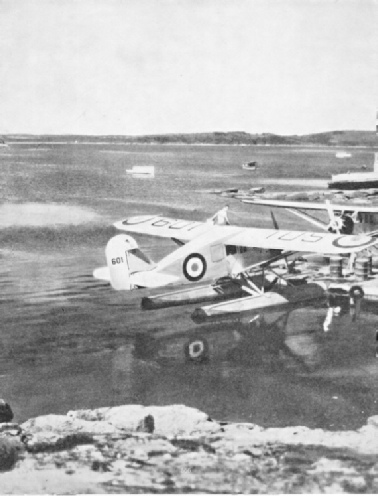 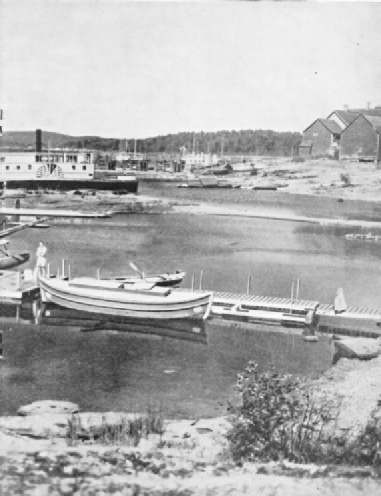 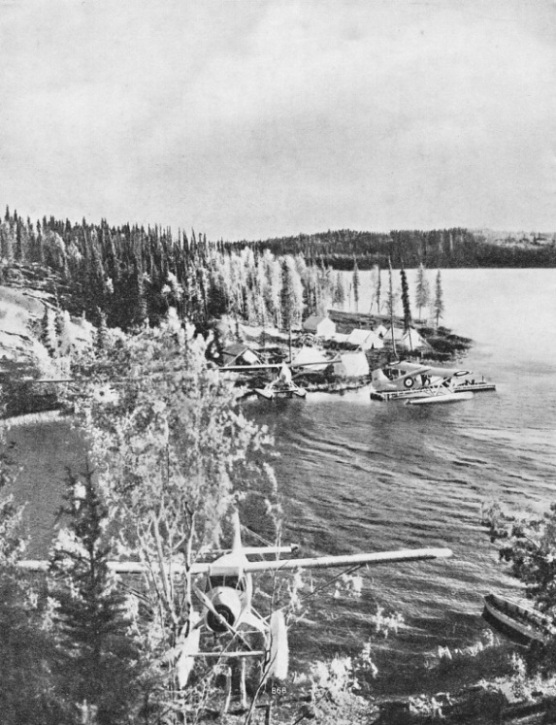 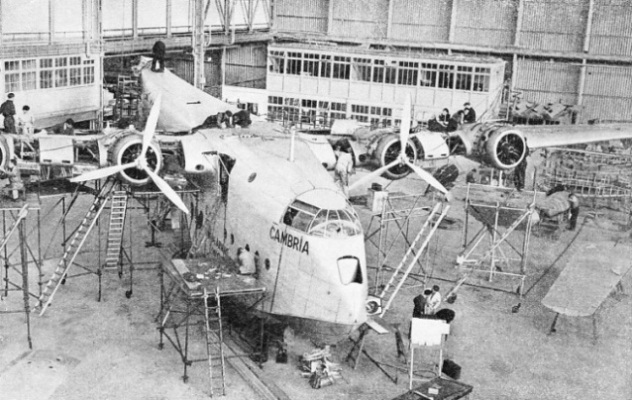 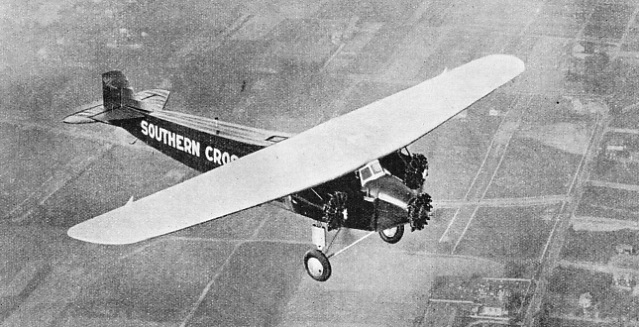