This week’s cover shows a Royal Air Force biplane about to be launched from a catapult at No.1 RAF Flying Training School at Leuchars, Scotland.

An article on Catapults for Aircraft appeared in Part 15 and Part 16. 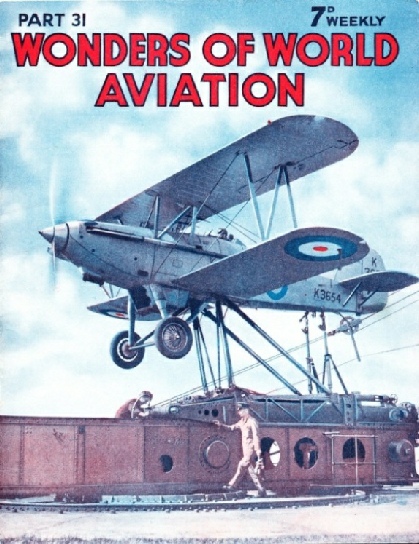 Every RAF squadron - as Peter Duff tells us in this chapter - has, or is due to have, its own distinguishing badge and its motto. All the badges follow the same basic specifications. Each badge is surmounted by a crown. A scroll beneath the badge bears the squadron’s motto. On either side of the face of the badge is the official number of the squadron, in Roman or Arabic numbers. On the upper half of the circumference is the description of the squadron; on the lower half are the words Royal Air Force.

The subjects chosen for a RAF badge vary greatly. Sometimes they are winged bombs or flashes of lightning, sometimes they are real or legendary animals. One squadron has a skull and crossbones, another a ship m full sail. Very often an attempt is made to suggest the squadron’s past history in the device chosen. Thus, for example, the springbok’s head of No. 26 (Army Cooperation) Squadron shows that the squadron was connected with South Africa.

The competitive spirit is revealed in mottoes such as In omnibus princeps, “First in all things”, of No. 1 (Fighter) Squadron, Tertius primus erit, “The Third shall be first”, of No. 3 (Fighter) Squadron, and “Leads the Field” of No. 12 Squadron. All RAF squadron badges are designed by the Chester Herald, College of Arms, and they are approved by the King before registration.

Flying Boats and their Work (Part 2)

Flying Boats and their Work (Part 2)

The conclusion of this chapter, by Captain Norman Macmillan, describing the service and commercial uses of large aircraft that operate from water. The article is concluded from part 30.

THE AKRON BROKE LOOSE from the mooring mast in the naval tanker Patoka, off Norfolk, Virginia, at the first attempt. The airship was successfully moored at the second attempt. When moored, the Akron remained at the mast for forty-five minutes. The Los Angeles was also successfully moored to this mast and remained there for long periods.

AN ASCENT FROM THE CRYSTAL PALACE, London, was made in The Mammoth Balloon by Coxwell, Glaisher and nine passengers on September 1, 1862. It was in this balloon that Coxwell and Glaisher made their record ascent to seven miles from Wolverhampton, Staffordshire, four days later. The balloon was made of American cloth and had a capacity of 93,000 feet. Three ascents were made in this balloon from Wolverhampton - on July 17, August 18 and September 5, 1862.

IN THE AIRSHIP CONSTRUCTION SHED at Akron, helium gas is stored beneath the floor. A million cubic feet of gas can be stored at a pressure of 750 lb per square foot. The shed is 1,175 feet long by 325 feet wide and has a height of 211 feet. A network of tunnels below the concrete floor is used to bring in power, water, fuel and helium gas, and to provide other service facilities. The airship in the shed is the Macon.

The series “Air Fleets of the Nations” has already brought me many appreciative comments. This week Major Oliver Stewart deals with the Italian Air Force. Italy’s army and navy air sections were amalgamated by Signor Mussolini in 1923. The great advance in the Italian air force since that date is largely due to the influence of Marshal Italo Balbo. Marshal Balbo, himself a skilled pilot, gained international fame for his leadership of the formation flights across the Mediterranean in 1928 and 1929, across the South Atlantic in 1930-31 and across the North Atlantic in 1933.

The Italians came near to winning the Schneider Trophy, as they won the contest three times. Great Britain acquired the trophy for good in 1931 with three successive wins but with a greatly enhanced opinion of Italian air skill and efficiency. Great Britain gained the world speed record shortly after she had secured the trophy, but Italy captured the record in 1933. This is the third article in the series on Air Fleets of the Nations.

On September 5, 1862, as P. R. Bird reveals in this chapter on altitude pioneers, two men ascended in a balloon from Wolverhampton, Staffordshire, to a height of seven miles. These two pioneers were H. T. Coxwell, a dentist who had become a professional balloonist, and James Glaisher, a scientist. Glaisher became temporarily unconscious; Coxwell, numbed by the cold, saved his life and that of his companion by pulling the valve rope with his teeth, so that the balloon could descend to earth. Coxwell and Glaisher’s record ascent remained unbeaten for many years. This record probably stood until June 30, 1901, when the German balloon Preussen ascended to 35,400 feet.

Sidney Howard contributes this chapter on Norway’s aviators. Lieut. Tryggve Gran won international fame in 1914 for his flight across the North Sea. Roald Amundsen, the discoverer of the South Pole, made several aeroplane flights in North Polar regions before his successful voyage in the airship Norge over the North Pole to Alaska in 1926. The flight of the Norge will be described in a later chapter, which will deal also with the last voyage of the Italia, sister ship of the Norge. This article is concluded in part 32.

A THRICE-WEEKLY POSTAL SERVICE runs from Trondheim to the most northerly parts of Norway. This photograph shows a DNL Airline’s postal machine in the harbour of Bodo. The aircraft is a Junkers Ju.34 seaplane, a type which is at present used on the night mail service between Oslo and Copenhagen. Its BMW Hornet engine gives the seaplane a speed of 134 miles an hour at 3,000 feet.

No. 601 County of London Squadron

A WINGED SWORD is the symbol used on the badge of the No. 601 County of London Fighter Squadron. The symbol is seen painted on the tail fins of these Wapiti aircraft. No. 601 is an Auxiliary Air Force Squadron. Originally the unit was formed at Northolt as a bomber squadron in 1925; it received its present name in 1934. The squadron is now equipped with Hawker Demons.

HIGHLY SUCCESSFUL, the T.C. 13 was transferred to the United States Navy in 1938. She is shown flying above Chicago during the Exhibition of 1933. The T.C. 13 is a non-rigid airship with a capacity of 360,000 cubic feet. She was built with a length of 233 feet and a diameter of 54 feet. The car is over 40 feet long and is built flush with the envelope.

EMPIRE FLYING BOAT CORSAIR being launched at Hamble, on the eastern shore of Southampton Water. The Short Empire Flying Boat is a high-wing cantilever monoplane accommodating twenty-four passengers by day and sixteen by night. In addition to baggage and 1½ tons of mail. Each of the four Bristol Pegasus XC nine-cylinder radial air-cooled engines had a normal horse-power of 740. The maximum speed of the standard boat is 200 miles an hour at 5,500 feet and the cruising speed 164 miles an hour. The range in still air is 810 miles (Page 825)

My readers are familiar with the story of the historic crossing of the North Atlantic by Alcock and Brown in their Vickers-Vimy aeroplane in 1919. It will probably surprise many people to learn from Captain J. A. Sinclair’s chapter on American airships that the first attempt to cross the Atlantic by air was in 1910. In October of that year, Dr. Walter Wellman, commanding the small airship America, covered 1,000 miles of the crossing in three days before it became necessary to take to the boat which had been slung underneath. Wellman and his companions were rescued by a passing vessel. Recent airship development in the United States has demonstrated the success of the non-rigid type. The United States Navy is now responsible for all airship development in America.

TWO-SEATER FIGHTER SEAPLANE flying over Melbourne, Australia. The seaplane was launched from the Italian cruiser Raimondo Montecuccoli which had called at the harbour. The aircraft is a Meridionali Ro.43, powered by a 700 horse-power Piaggio PXR radial air-cooled engine. An interesting feature of the aircraft is the single float instead of the more usual twin floats. The maximum speed at 6,560 feet is 196 miles an hour. The Ro.43 will climb to 16,400 feet in 12 minutes 50 seconds.

COMMISSIONED IN 1938 for naval training, the non-rigid airship L-1 has a gas capacity of 123,000 cubic feet, is 147 feet in length and has a maximum diameter of 37 ft 8-in. Two 147 horse-power Warner engines give the airship a maximum speed of sixty-three miles an hour; the cruising speed is fifty-three miles an hour. 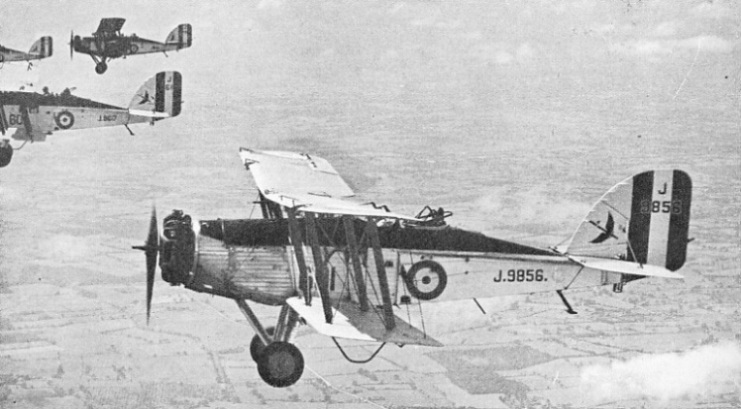 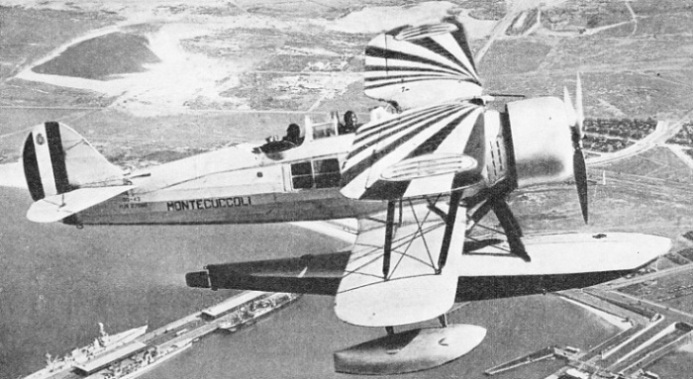 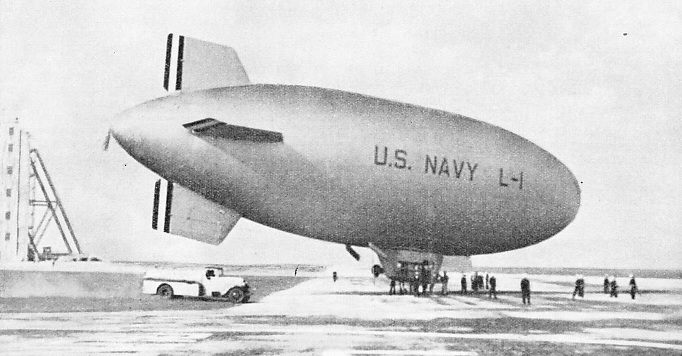 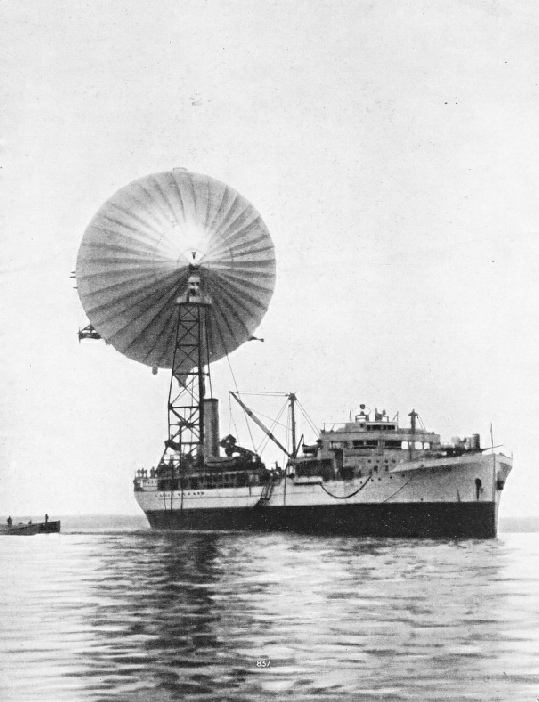 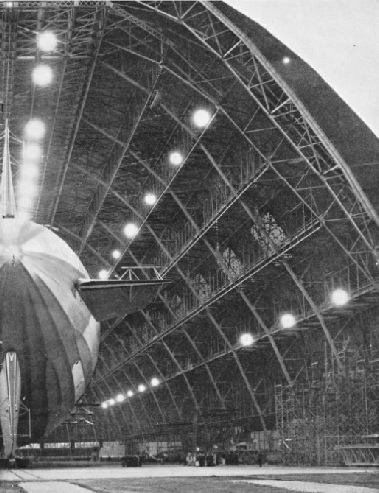 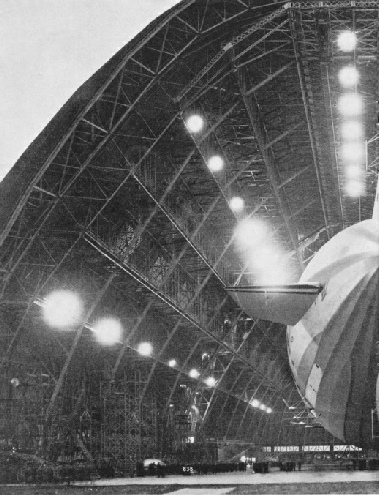 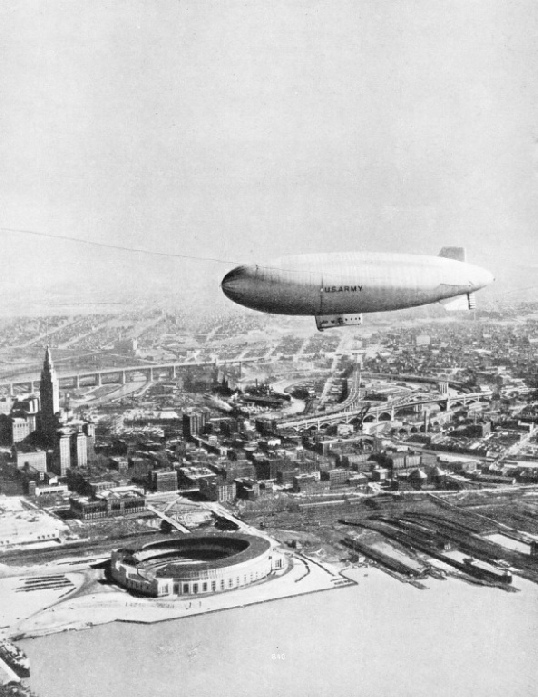 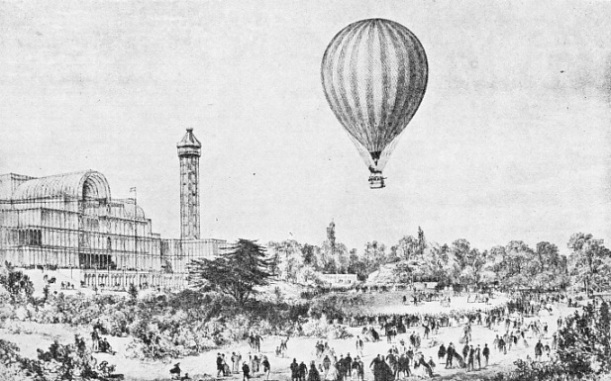 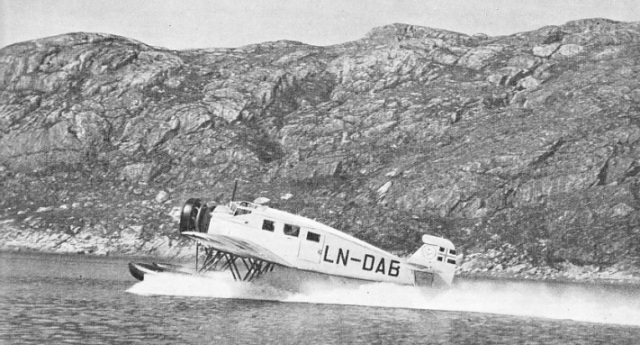