Our cover picture this week shows a Supermarine Walrus being lifted into HMS “Devonshire”. The Supermarine Walrus type of single-engined amphibian was designed for fleet-spotting work, and was adopted by the Admiralty for use in the Fleet Air Arm in 1935. These aircraft have a length (on chassis) of 37 ft 7-in and a span of 45 ft 10-in. The engine is a Bristol Pegasus VI. 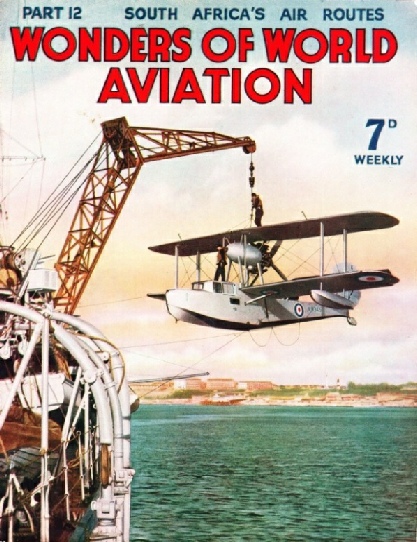 Some of the fantastic contraptions invented by man in his attempts to conquer the air. The earliest efforts and ideas of would-be flying men may appear to be ludicrous and often to border on lunacy. But it would be scarcely fair to deride them as eccentric. Many have declared that the freakish products of over-ingenious inventors have no place in the history of aircraft, bit there is little doubt that these pioneers did create an interest that these pioneers did create an interest in aeronautical invention.

Readers who have been surprised to discover how long ago it was that Man first tried to solve the problems of flight will be specially interested in this chapter. It reviews some of the more important suggestions for flying machines of which records remain; there must have been a great number of other imaginary aircraft which were never recorded, or of which the records were lost. Amusing as some of these recorded imaginings appear to be, they are noteworthy as having played an important part in the practical realization of the dream of flight. Many pioneers have acknowledged their indebtedness to the seemingly fantastic ideas of their predecessors; and in some instances - notably in that of Sir George Cayley’s work - the ideas were so far ahead of contemporary practice that it was a long time before their essential soundness was recognized.

To illustrate this chapter we have reproduced some famous old pictures. By comparing their primitive simplicity with other illustrations that show modem methods of flying, the thoughtful reader may make some interesting deductions. He will, for example, appreciate the importance of scientific methods of propulsion, for that vital factor in modern aeronautical practice was beyond the imagination of men who lived before the Mechanical Age. This chapter is contributed by W A Bagley.

AIRCRAFT IN FRONT OF THE BUILDINGS AT THE RAND AIRPORT. With the completion of work on this airport, the total cost is estimated at £400,000. Within the circular concrete parapet is a large clock; its face and hands are specially designed to be easily read from the air. The waiting aeroplanes are two Junkers three-engined machines and an Airspeed Envoy.

DE HAVILLAND EXPRESS AIR LINER of Qantas Empire Airways. It is powered by four Gipsy Six engines. These engines are of the inverted type, the crankcase being above the cylinders. Qantas Empire Airways had its beginning in 1920 in the Queensland and Northern Territory Air Service. It is the company which operates the Australian end of the Empire air route between Singapore and Australia.

In this chapter by Sidney Howard, the development of Australia’s civil aviation is described. The article is concluded from part 11.

From the exploits of pioneers to the rapidly expanding services of today. The air routes of South Africa, dealt with this week by Sidney Howard, are fitting reminders of Africa’s debt to aeronautics. Sir Alan Cobham’s pioneer Empire flights, the story of which was begun in Part 10, showed what great possibilities for improved transport were latent in Africa. These latent possibilities are now being further explored and developed, and it seems probable that aviation will play a more important part in the progress of Africa than in that of any other continent. The great distances to be covered, the large number of suitable alighting places, and the vastness of Africa’s resources render that continent exceptionally suitable for development.

Recent events in Europe have brought me a number of inquiries about the air fleets of foreign countries. It is well known that for various reasons the exact state of aviation abroad is not readily ascertainable. Some of my readers have wondered if, because of this, it will be impossible to make our survey of the air a world-wide one. There need be no fears on this score, for my original plan will be adhered to as closely as possible. It will be remembered that my aim was to give, in the complete work, a picture of world aviation as it exists today; and as far as possible that will be done.

AN AIRSPEED ENVOY PASSENGER AEROPLANE used by South African Airways. Four of these aircraft are in use on services in the Union of South Africa. They an be converted for military purposes, and three similar machines have been acquired by the South African Air Force as fast medium bombers. When used for commercial purposes the machines accommodate six passengers. They have two Armstrong Sidddeley Cheetah IX engines.

AIR ROUTES OF SOUTH AFRICA. The Union has air lines joining most of the principal towns. These lines link up with the Imperial air line from England to Durban, and with towns in other parts of Africa.

A GEOLOGICAL SURVEY of Qishm Island, in the Persian Gulf, necessitated the taking of sixty photographs to form a mosaic of the area. The remarkable circular formation shown in this picture is a salt plug of Cambrian age intruding as a cylinder through the normal strata of Miocene-Pliocene beds. The plug itself has a diameter of about fourteen miles. The black area is the sea.

Converting air photographs into conventional maps. This is another fascinating chapter in the series on Air Photography, by Squadron Leader P. R. Burchall. This subject has so many facets of interest that only the recognized expert can deal faithfully with it. Many readers who have not appreciated the significance of air photography will be interested to know of

its amazing applications. In one air photograph, taken in America, a range of mountains that was 600 miles away from the camera was clearly visible. Our contributor tells in this chapter of the methods by which flying maps are made.

THE WILD AUTOGRAPH, a modern type of automatic mapping apparatus made in Switzerland. The operator places a pair of air photographs in their carriers, adjusts them for orientation and tilt and sets the instrument for scale. By turning the controlling wheels he keeps two indexes in simultaneous coincidence with the pairs of photographic images of a series of ground points. The lines on the map are drawn by a mechanical pencil, the movements of which are controlled by the turning of the wheels.

You can see another photograph of a stereoautograph in Military Topography and Photography by Floyd Carlock (1916).

A British pioneer who helped to build up a vast industry. Some of the stories  of the makers of air history are romantic, if only because of the rapidity of development which they disclose. The story of Geoffrey de Havilland, which begins in this Part, is the story of a pioneer who, from small beginnings, has piloted his own machines to outstanding successes. This chapter is written by Miles Henslow, and is concluded in part 13. It is the fifth article in the series on Makers of Air History.

The Prototype of the Albatross

THE PROTOTYPE OF THE ALBATROSS on the tarmac at Hatfield, Hertfordshire. Designed for transatlantic flights, the Albatross represents one of the most recent advances in British civil aviation. This low-wing monoplane is driven by four Gipsy Twelve engines of 500-550 horse-power, through controllable pitch airscrews.

E. G. Robertson of Vienna at the beginning of the nineteenth century. It was seriously proposed to build such a craft with its galleries, churches, hanging cabins, sails and guns. The object was to send sixty people on a long balloon voyage of scientific observation. 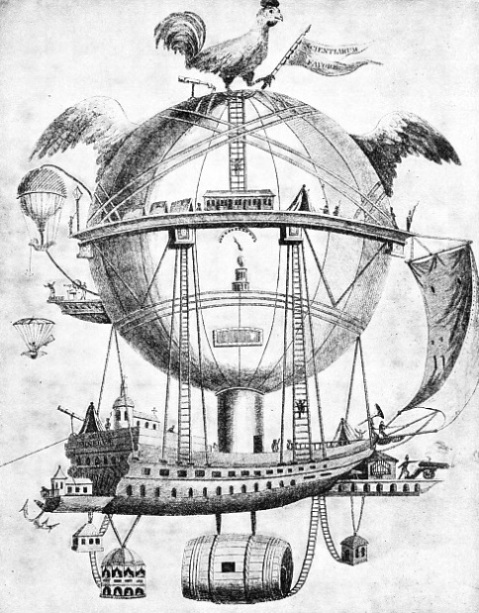 The second diagram appears in Part 13. 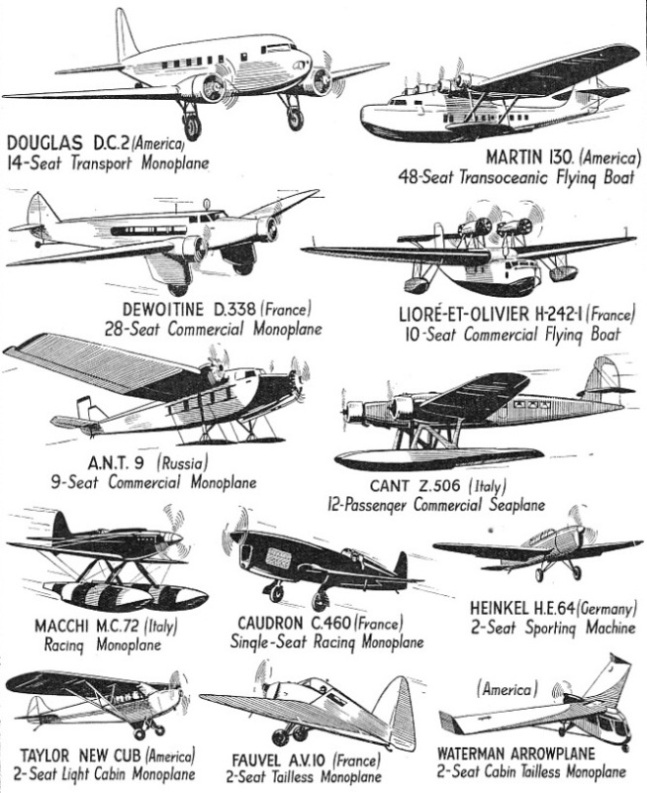 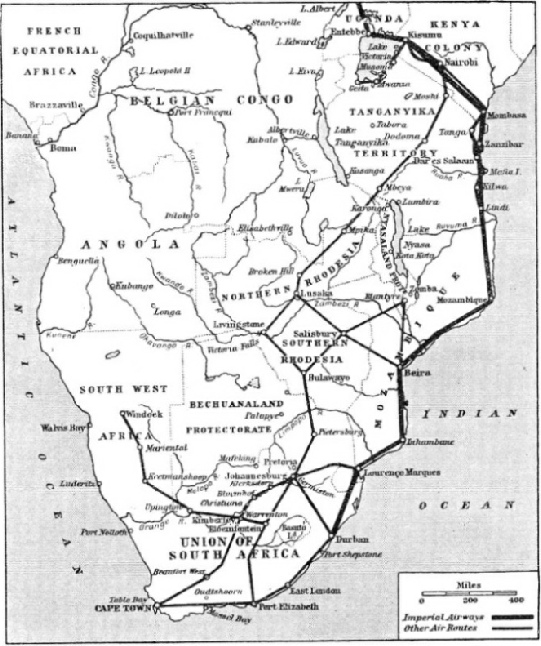 PASSENGERS BOARDING ONE OF THE JUNKERS AIR LINERS of South African Airways. This picture shows the corrugations on the metal covering of the wings. These corrugations assist in stiffening the wings against torsion. A flap runs along the length of the trailing edge of wither wing, and is so mounted that it gives a double-wing effect. It can be sued to vary the camber of the wing and thus increase the lift. 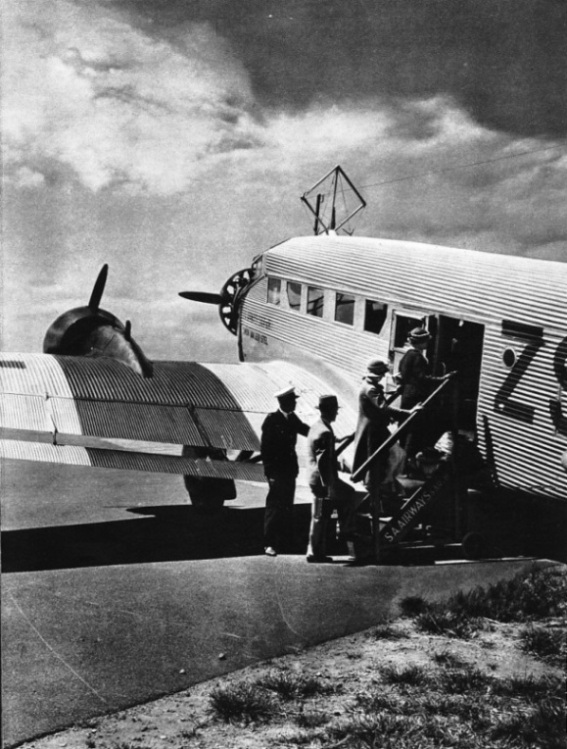 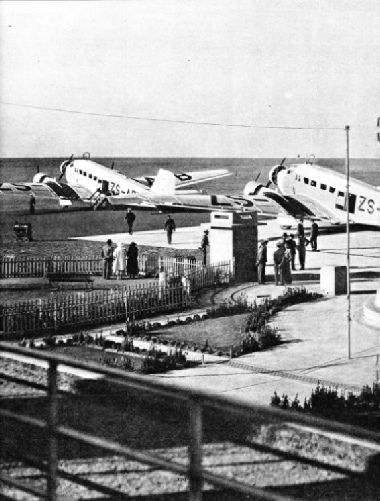 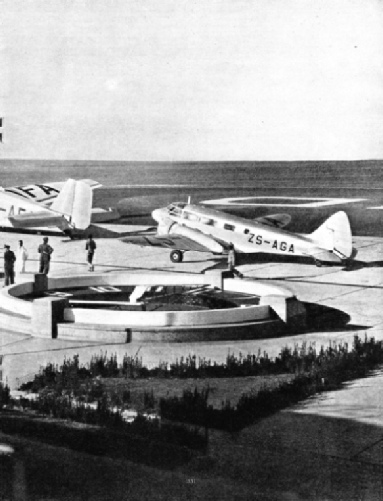 IN THE ENGLAND-AUSTRALIA AIR RACE OF 1934,

K. F. H. Waller flew a de Havilland Comet, which is seen here at Baghdad, Iraq. The race, from Midlenhall, Suffolk, to Melbourne, was won by C. W. A. Scott and

T. Campbell Black, also in a DH Comet. This machine was used also by A. E. Clouston and V. Ricketts in March 1938, on a flight from England to New Zealand and back. Many new records were set up on this flight.

A DE HAVILLAND AIR LINER, the DH 86, at Speke Airport, near Liverpool. This machine carries passengers, freight and mail for Blackpool and West Coast Air Services, Ltd. Driven by four Gipsy Six engines, the DH 86 has a span of 64 ft 6-in, a length of 46 ft 1¼-in, and a height of 13 feet. The maximum speed at sea level is 166 miles an hour. 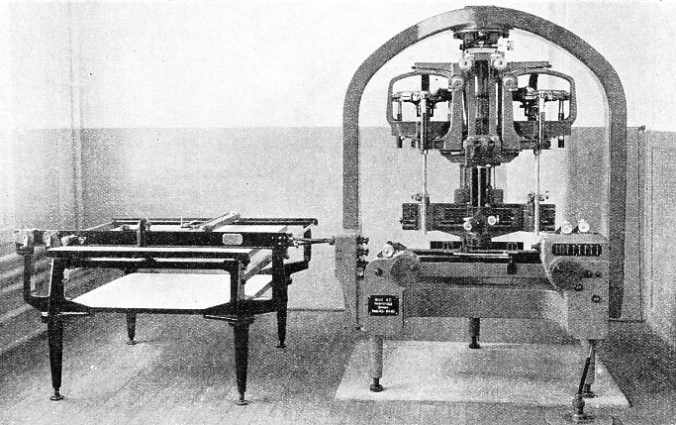 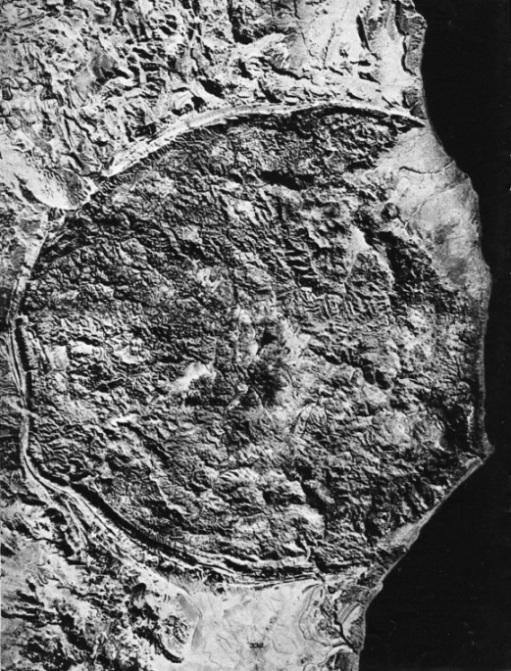 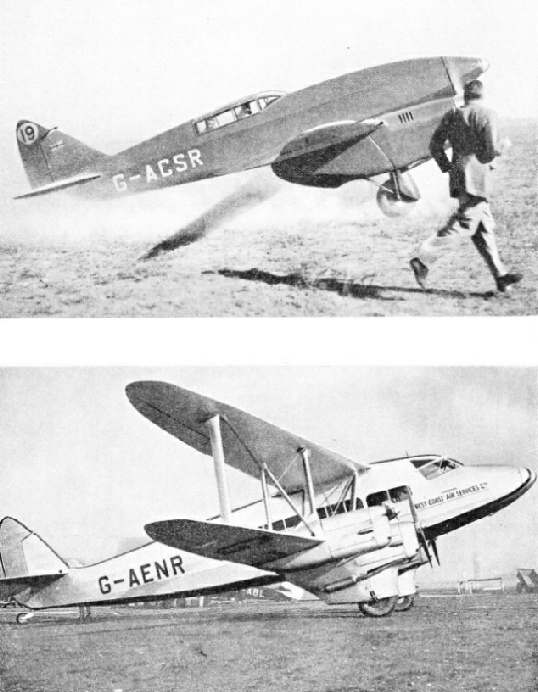